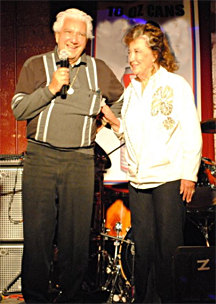 In 1962, The Johnny Lewis Trio played the Seattle World’s Fair and, from 1963 to 1965, played at the Tyee Motor Inn. During this time, Johnny began teaching music lessons at the Lacey Music Center on Pacific Avenue, owned by the Torrence family.

In 1966, Johnny purchased Lacey Music Center. The purchase included the store, an old church on the corner of the property, and nine acres bordering Carpenter Road.

In 1969, Johnny met Ruth Brown and her four children: Steve, Jeff, Tracey, and Dana. By 1970, Ruth and the four kids began working in the store. In 1973, Johnny and Ruth married, and the Lewis family as we know it today came into existence.

By 1977, the store moved to the old Church at 6000 Pacific Avenue and Lacey Music Center became Music 6000. This is where the history of Music 6000 starts — an old church on a busy street in Lacey.

From 1978 to 1985, the store grew and Johnny and Ruth left more of the daily operations to Jeff and Steve. The brothers built the store up until it was bursting with gear. The first employees were Mark Eckert, Perri Jenkins, and Dave Broyles. By 1990, the 9 acres were sold to Albertsons and the Lewis family purchased the building at 2921 Pacific Avenue where Music 6000 continued to grow.

In 2006, Music 6000 moved to its present location at 3738 Pacific Avenue, doubling its previous floor space. Since then, Music 6000 has continued to provide the best service, personality, and gear around.